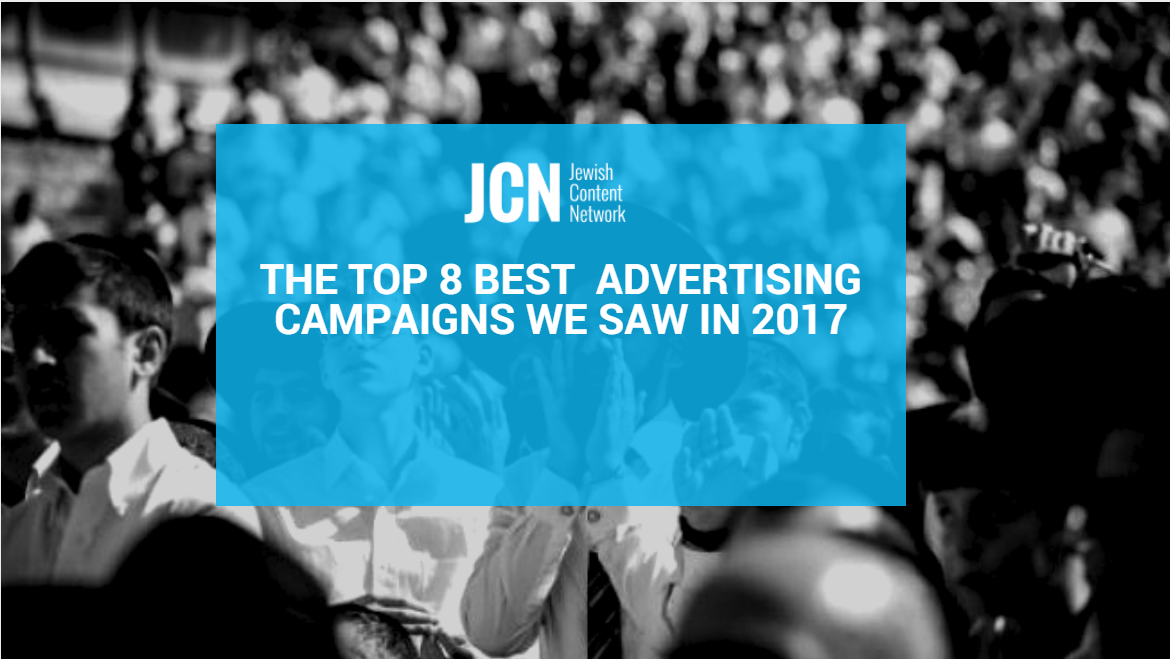 As the industry leaders of online Jewish advertising, we see a LOT of ads here at the Jewish Content Network. Every business who advertises with us designs and creates their own ads, and they often ask what are some best practices for effective ads. Here are some of our best tips, along with real world examples from advertising campaigns that did well in 2017.

Grab your audience’s attention with a shocking headline and/or image. In this example, the headline mentions frum people and jail which are not often correlated.

Also, the image adds a shock factor since it’s a jail cell which invokes people’s interest.

If something big happens on the news, ads related to that topic will do really well! Back when Netanyahu made a speech to the UN that went viral, one of our advertisers put up a video ad about that speech, and the click-through-rate was really high!

And by the way, topically relevant isn’t just for juicy news stories. Especially in the Jewish world, the time of year can be a “hot topic.” Specifically, Pesach! One of the most successful video campaigns last year was a music video related to Pesach.

Since Pesach was on EVERYONE’S mind for quite a few weeks before (and even after) the holiday, people clicked on the ad because it was so relevant.

Behold the Power of Celebrity

Like it or not, the Jewish world has celebrities that will automatically boost the effectiveness of your ad. If your ad is related to any sort of Jewish celebrity, whether it be a singer, lecturer, Rabbi, business mogul, etc., using that person’s picture will help your ad do well.

In this ad, Avrumy Holczler is shown singing and the headline uses the words ‘video’ and ‘viral’ which tells the audience that if they click on the ad, they’ll be able to see Avrumy’s latest viral video.

If your campaign isn’t at all related to anyone of fame in the Jewish community, hope is not lost! If you can use an image with a person’s face (assuming you have the rights, of course), that can also be powerful in getting a good click-through rate. Go for a confident looking person, and you’re golden.

Or Go With a Famous Icon or Landmark

If you don’t have a famous person to use for your image, try to use some other sort of easily recognizable icon, such as the Statue of Liberty or the Kotel.

In the example to the left, the site PegishaPlace was started in New York, so using an image with a classic NY icon helped get extra attention. Remember that the point of your ad is to get more clicks, so even if the image isn’t 100% directly connected with your ad, try to use an iconic image.

Remember What Your Audience Likes

Since the image is the part of your ad that viewers will see first, always look for an image that will appeal to your audience. Virtually everyone in the Jewish world thinks about shidduchim/weddings/marriage, so using an image like the one below with a couple on their wedding day will grab people’s attention.

Notice how the headline isn’t directly related to the image. But since you grabbed the audience’s attention with the image and also added a mysterious headline, people are going to be curious about what the ad is about. This ad performed really well because viewers clicked out of curiousity.

Everyone wants to think that they’re not susceptible to click bait, but the fact is that they are. Ads with “click-baity” headlines outperform “regular” ads all the time, and it’s because click bait works. It’s an ever changing science because people get tired of certain headline styles, so try to come up with some of your own variations.

Good “click-baity” headlines can use “you” phrases such as “You Won’t Believe X” or “You Will Want To Check Out Y.” Or use something short, but compelling, such as the powerful headline in the ad to the left.

Do All of the Above!

Combine one or all of the tips above for some REALLY great advertising! Check out the ad below that was incredibly successful.

This ad was created just a few days after the story of Rubashkin’s release was announced. It was topical (and it was a highly discussed topic making it even more relevant and interesting to users), it uses a celebrity for the image, and the headline is shocking and intriguing (i.e. “click-baity”). This is a winning advertisement, and it performed in the top 5 percent of ads on our sites.

Interested in advertising with us? Fill out the form below and one of our agents will be in touch shortly.